EAST LANSING – A new solar array largely financed by dozens of public and private investors is now on line at a former landfill site in East Lansing.

Some of the solar panels photographed at the East Lansing Solar Park on Wednesday, Jan. 23, 2019, at Burcham Park in East Lansing. The park, which became operational on December 28, 2018, has 1,000 solar panels that will produce enough to power around 60 homes. (Photo: Nick King/Lansing State Journal)

But the delays were water under the bridge for about two dozen local officials who stood in the rain and mud for a ceremony Wednesday at the project site at Burcham Park.

“It took us awhile to get here,” said Lansing Board of Water & Light CEO Dick Peffley, who lauded the project as a boon for BWL customers who want to invest in renewable energy but can’t afford to add solar panels at their homes or businesses. “We’re just going to continue to build these for our customers who want it.”

The $600,000 community solar project is the first of it’s kind for BWL, which partnered with Michigan Energy Options and Pivot Energy in the East Lansing facility. The 1,000 solar panels are capable of producing enough electricity each year to power about 60 homes.

About 144 customers signed a 25-year lease and paid about $400 per panel. In turn, they’ll get a credit on their electric bill for the energy produced by those panels. 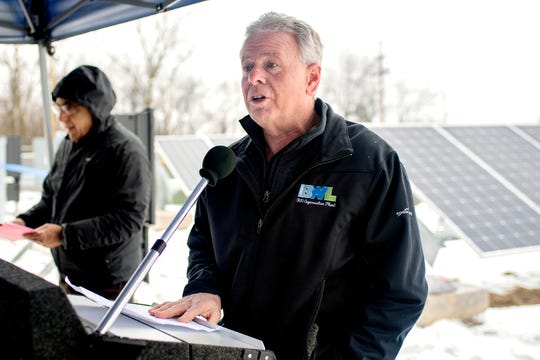 Lansing BWL General Manager Dick Peffley speaks during a celebration of the opening of the East Lansing Solar Park on Wednesday, Jan. 23, 2019, at Burcham Park in East Lansing. The park, which became operational on December 28, 2018, has 1,000 solar panels that will produce enough to power around 60 homes. (Photo: Nick King/Lansing State Journal)

“I’m very proud to live in a community that not only talks about clean energy (but invests in it),” East Lansing City Councilman Aaron Stephens said.

The project was beset by numerous delays, and the list of partners has changed since discussions began about five years ago.

In 2016, organizers talked of building an 1,800-panel array, enough to power about 100 homes. At the time, officials said the facility would be completed by early 2017.